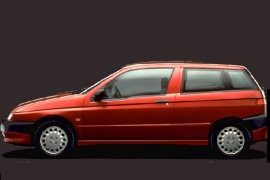 Alfa Romeo introduced the Alfa 145 model at the 1994 Turin Motor Show.
Designed to take over from the old 33 Series on the mid-size hatchback sector, the new 145 model came in a 3-door configuration and featured an innovative cut-off dashboard.

Exterior design was also considered quite edgy, while the platform on which the 145 was based on belonged to the same Fiat Tipo. This model received a new Cloverleaf variant in 1996 and replaced all its boxer engines with Twin Spark units a year later.

Early models came in with a longitudinally mounted engine, overhanging the front axle, but then the automaker decided to stick with a transverse setup. Both configurations were using 5-speed gearboxes. The model also relied on a unibody structure, with MacPherson strut and rear trailing arm suspension as well as rack-and-pinion power steering.

The Alfa 145 was slightly modified a year before its discontinuance, featuring color-coded bumpers, new-designed mirrors and standard side airbags.