Audi unveiled the sixth generation of the A6 Avant in 2018, along with its three-box sedan brother, before the Geneva Motor Show.
The A6 Avant continued the station wagon shapes for the German premium carmaker. Even though it didn’t offer the biggest trunk in its segment, the car was able to carry more than enough luggage. Surprisingly, it didn’t offer more storage area than its predecessor, but Audi’s engineers were more focused on other areas.

Its new look was aggressive for a family station wagon but preferred by the Audi customers. It sported a singleframe grille with horizontal slats and LED headlights, and daytime running lights. Its wide side-scoops from the bumper suggested that they were used to cool the front brakes. From its sides, the A6 Avant featured an extended roof slightly sloped down toward the raked-forward tailgate. In the back, the carmaker installed standard LED taillights. Its rear bumper featured two fake wide exhausts.

Inside, Audi worked hard to keep up with the best in business carmakers. As usual, it offered a carefully crafted interior with high-quality materials and finishes. In front of the driver, the instrument cluster featured a 12.3” digital display (Audi Virtual Cockpit). On the center stack, the carmaker introduced a newly developed MMI (Multi Media Interface) with an up to 10.1” touch screen.

Under the hood, the biggest surprise was the mild-hybrid version, which allowed the big vehicle to coast with the engine shut off at speeds between 55 and 160 kph (34 – 99 mph). In total, Audi offered a choice of eight engines with front or all-wheel-drive systems. 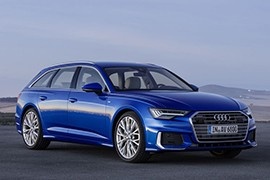