The world is turning against diesel engines but Audi insists that turbodiesels are not dead.
Their best statement is the latest Audi S4, which is based on the A4 range.

It is the most powerful version of the diesel engine installed into an A4. The engine is a highly tuned 3.0-liter V6, which can be found also on the big SUV Q7. Due to a twin-turbo and an electric supercharger, the powerplant develops 347 hp and 700 Nm (516.3 lb-ft) of torque. The engine is helped lowering its emissions due to a mild-hybrid system with 48-volts architecture. This stores energy into a floor-mounted battery and use it when needed. The start/stop function incorporates a belt-driven starter/generator.

The transmission is via an 8-speed Tiptronic gearbox and sent the torque to a self-locking center differential, unlike other quattro versions from A4 which are using an electronic-controlled unit. A sport differential is available as an option. As for performances, the S4 TDI can sprint to 100 kph (62 mph) in 4.8 seconds.

Inside room is enough for five people since only the front seats are bucket-type. The Audi MMI has the same large display in the middle of the dashboard. It supports Android Auto and Apple CarPlay and can be accessed either via a touch-screen.

From the outside, an S4 can be easily recognized by the honeycomb front grille structure surrounded by a chrome line around it. The headlights are LED fitted as standard. For the S4, Audi offers standard 18” wheels with 245/40 tires. The customers can choose for 19” wheels fitted with 255/35-series tires. 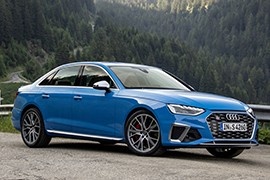