Just like its fixed-roof coupe brother, the most powerful version of the third-generation Audi TT Roadster was facelifted in 2019.
As expected, most of the improvements were made to the design of the model, with the engine and transmission being almost identical as its predecessor.

The revamped TT RS Roadster has new front and rear ends albeit in a very subtle way that needs a closer look to appreciate all the new details. At the front, the quattro logo now has a matt titanium-look and sits in the lower section of the grille, which is gloss black and surrounded by the hallmark matt black Singleframe.

The side intakes found on its predecessor have been enlarged and are each divided by vertical strips that make car appear even wider. The front spoiler blade has the same color as the rest of the body but can be optionally painted in a matt aluminum look, glass black or even carbon.

The standard LED headlights have been revised as well, while the optional matrix LED lights are even more responsive. The rear gets optional matrix OLED taillights, which have a distinctive 3d design and can put on a spectacular show every time the car is turned on.

Most of the interior has been left alone, although Audi did specify the car with an improved RS package as an option. Among various exterior enhancements, the package adds red or blue highlights to the air vents, seat belts and the floor mats, while an extended version of the package also comes with contrasting design elements on the seats and center console.w 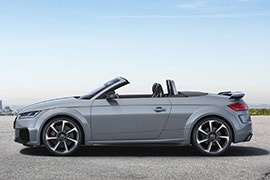