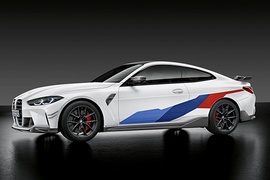 While the M3 was reserved for the four-door sedan version, the coupe was renamed as 4-Series.
Thus, the M version was named M4.

Since the split between the coupe and the sedan/station-wagon version of the 3 Series, the 4-Series took the lead for the coupe versions. That’s how the M4 appeared on the list.

The 4-Series was a shocking appearance when it was introduced in June 2020. The kidney-grille got bigger and now covered the middle side of the front fascia from the bottom of the apron to the hood. It was ginormous! On the sides of the front bumper, BMW installed a pair of vents to cool the brakes. The sculptured door panels and the raked C-pillars resembled the silhouette of the BMW 8-Series. Four exhausts were placed under the rear apron.

Under the hood, the M4 surprised its customers with the introduction of the all-wheel-drive system. It was the first M4 that sent its power to all four wheels. The standard gearbox was a six-speed manual. For that, the power went exclusively to the rear wheels. The xDrive version was available only in conjunction with the 8-speed automatic. 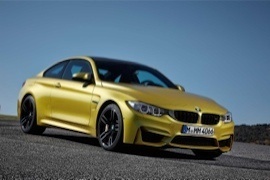 Back in 1985, the BMW introduced the M3, a rather sports car that was successful in touring motorsport.
Wondering what’s the connection to the M4? Well, the M4 was a coupe M3.

While the M4 was basically the same car as the M3, the difference was the shape of it. At the same time, the M4 brought some of the practicality of the 4 series.

The load capacity was more than enough for two big luggages, as well as the cabin being equipped with lots of storage spaces – not very big though. The reason why the storage space was limited was the carbon drive shaft that was located underneath the center.

While almost as practical as the 4 series, the M4 had a more aggressive design, with a big open grille to let the air in, as well as air vents on the sides of the bumper. The back mirrors had the iconic aerodynamic design we already know, the big brake discs were ventilated and made of ceramic carbon fiber.

Actually, carbon fiber was used both on the exterior and the interior to lower the car’s weight.

The back of the M4 added to the visual aggressiveness with the 4 exhaust pipes, as well as the rear spoiler integrated into the trunk lid.

The design might look a bit too friendly compared to what was under the hood. The 3.0-liter straight 6 developed 425 hp and rocketed the coupe to 100 kph in 4.1 seconds.

Definitely not a cheap car, its price started at $71.000. At the same time, I would say it was a decent price for what the M4 had to offer.