The sad story of the Bugatti 64 begun in the mid-’30s, when Jean Bugatti tried to make a more convenient car based on the Atlantic, but fast enough to break the 120 mph (197 kph) barrier.
Bugatti was already a significant and respected name in the industry for its high-performance cars. Jean Bugatti, son of Ettore Bugatti, tried to make a fast enough car to keep its standards, but more comfortable to use. For that, it took its inspiration from the aircraft industry and used light materials such as aluminum.

The 64 started as a prototype with a duralumin chassis and a unique shape. It was the first car that featured butterfly doors, or gullwing as they were known later on due to the Mercedes-Benz 300 SL from the ’60s. The car’s shape resembled the Type 57 and the Aerolithe models. It continued the idea of a light and fast vehicle. Jean Bugatti completed only one model of the 64 before he died in a car crash on August 11, 1939. Just 23 days later, WWII started, and the production of luxury vehicles in France ended. On June 14, 1940, Paris fell under the German army.

Ettore Bugatti didn’t want to miss an opportunity and unveiled the car in October 1939 at the Paris Motor Show, even though the war was knocking on their doors. Its long lines were the final touch with aerodynamic cues and sloped end. It was a masterpiece for the automotive art-deco trend, made out of aluminum.

Under the hood, Bugatti installed a magnificent 4.4-liter inline-eight unit with a double overhead camshaft distribution system, in a time when most of the other carmakers were still producing engines with side valves or just overhead valves. 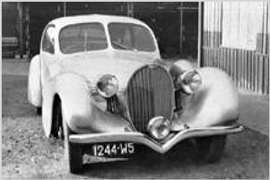