Buick introduced the Model 33 in 1911 as an upper version for the Model 32, with seating for five and a touring body.
While it shared most of its underpinnings with the 32, it provided three additional seats in the back. It was the four-door version of a sports car. It belonged to the Brass Era cars, and it showed it in many parts.

At the front, it featured a polished brass-covered radiator and headlights. Its sloped front fenders continued on the sides, with the steps followed by the rear fenders. Those were the times when people appreciated that styling. The carmaker installed a two-piece windshield with a folding upper side. Like any convertible vehicle from those times, it featured a removable rag-top, which the owner could have left in the garage and enjoy the open-air driving.

Inside, the Model 33 featured a two-seat bench at the front and another one for three in the back. The leather upholstery and varnished wood dashboard created a luxurious appearance. It even featured rear doors! Its dashboard featured a speedometer and a four-spoke steering wheel. Buick managed to convince customers to have a higher quality vehicle for about the same money as a Ford Model T.

For the drivetrain, Buick installed a 2.7-liter inline-four engine with an on-head-valve and external push-rods distribution system. It was paired to a two-speed gearbox and a multi-disc wet-clutch system. 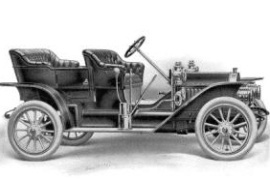