While Walter Chrysler started to work for Buick in 1910, the carmaker was already one of the country’s biggest, and the company tried to make a luxury model: the 39.
According to some sources, there were only 905 Buick Model 39, and they cost three times more than the base Buick model from those times. Durant tried to get into the upper segment since Ford’s Model T was hard to beat on volumes. The 39 offered features not seen before on a vehicle with that price. Its strategy worked for some time, mainly based on its more powerful engines.

The vehicle featured big, round headlights and a five-shape engine compartment with a distinct area for the radiator. Its wooden, multi-spoke artillery-wheels featured 36x4 pneumatic tires, which made the car more comfortable on the unpaved roads. Buick installed two additional oxyacetylene lamps on the car’s sides as an option. Like most of the other cars it built, it offered the customers a choice of bodyworks, with different prices, such as the torpedo with no roof or a four-door convertible with a rag-top that could have been folded in the back.

Inside, Buick installed comfortable, cushioned benches for all passengers. The steering was on the car’s right side, and a small speedometer was placed lower not to distract the driver. On the side-boards, the carmaker installed the spare-tires at the front and a set of tools in the middle, between the doors.

Buick installed its new four-cylinder engine inside the engine compartment that provided a massive 48 hp from the 5.2-liter engine. Its three-speed manual was the only transmission available. 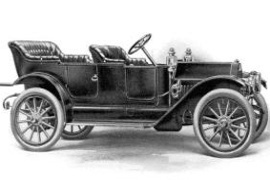