Thanks to its engineering visions, David Dunbar Buick established a great car company, and it was the biggest selling automotive brand in the U.S. in 1905.

At the beginning of the XIXth century, motoring was something hard to understand. The battle between electric cars and petrol-powered ones was not over. As a supporter of the later ones, Buick upgraded its engines with on-head-valves systems, increasing the specific power of its engines. It formed the General Motors holding, along with GMC, Chevrolet, and Cadillac.

The 1911 Buick Type 41 was a limousine known for its smooth ride and comfortable interior for its time. Like most of the other cars on the market, it was still built with a chariot-like bodywork and flat panels. The car was available either with an open side for the driver and a closed cabin for the rear passengers or with a bigger cabin for five. Buick made a name for building most of the parts in its factory, except carburetors, coils, lamps, and magnetos.

The four-door version featured two seats at the front and a bench in the rear for another three passengers. Its large windows offered protection against wind.

With a chassis built in cooperation with the biggest carriage-maker in the U.S., Type 41 offered a good ride compared to the other carmakers. With a 5.2-liter displacement, the four-cylinder engine was paired to a manual, 3-speed gearbox that sent the power to the rear wheels via a chain. 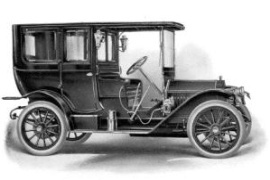