In a true Citroen fashion, the French carmaker delivered an unusually looking vehicle aimed to be its flagship.
It combined a station wagon, a crossover, and a coupe all in one package of a mid-size segment car.

After the dismissal of the C6 limousine in 2012, the carmaker kept only the C5 as a family sedan and flagship model. They had to admit that the luxury segment was no longer its asset, as in the past. Yet, it tried with the DS brand, which followed the same recipe as the Acura for Honda, Infiniti for Nissan, or Lexus for Toyota. But the C5 X unveiled a new approach, a transition towards a fully electric lineup.

The C5 X featured a higher ground clearance and big wheels, unusual for a sedan or a regular station wagon. Yet, these sported narrow tires lower the rolling resistance and improve fuel efficiency. Under the hood, the carmaker installed a range of gasoline or hybrid powerplants, ditching the diesel option for it. The narrow, LED headlights were incorporated into the same line that crossed the front fascia, interrupted in the middle by the “double-chevron” badge.

Its profile revealed a station wagon like a silhouette, with raked forward D-pillars and a set of spoilers. One was at the top of the tailgate and one at the waistline, in a Kamm-back design. The black plastic trims surrounding the wheel wells and the bottom of the front and rear bumpers amplified the SUV-like stance.

Inside, the carmaker placed a TFT display inside the instrument cluster in front of the driver. A second screen sat atop the center stack and was used for the infotainment system. Finally, a tall center console separated the front occupants and served as a storage area and armrests. In addition, it served for the transmission and suspension settings.

In the rear, a three-seat bench was installed for average-sized passengers, with enough leg- and headroom. The trunk provided 545 liters (19.2 cu-ft) of space, which could have been expanded to 1,640 liters (57.9 cu-ft) by completely folding down the rear seats. 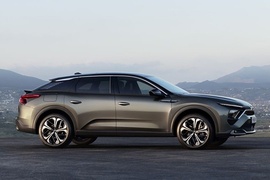