The first Ferrari PHEV (plug-in hybrid electric vehicle) was launched in 2019.
A new chapter with new possibilities was open and its figures of 1000 hp shocked everyone.

The name SF90 comes from the 90th anniversary of the Scuderia Ferrari (their competition department). The technology pack is impressive for any sportscar fan. The 4.0-liter V8 engine obtained 780 hp with help from a turbo. The rest of the 220 hp was given by the three electric motors installed to help the car’s launch. Since the SF90 was a turning point in the brand’s history, it was also equipped with an AWD system. Even if it is not the first AWD Ferrari, it was the first Ferrari sports car with an all-wheel-drive. And the results were matching the look of the vehicle.

Only 2.5 seconds were needed to do a 0-100 kph (0-62 mph) sprint. The strange 8-speed gearbox installed didn’t have a reverse gear. An electric motor was used for the reverse.

The three electric motors used offered a total output of 220 hp. Two of them were used for the front wheels and the third helps the V8 to power the rear wheels. The SF90 Stradale can be driven in EV mode, up to 25 km on a charge. The electric motors can be used at speeds up to 134 kph (84 mph) with a longitudinal acceleration of under 0.4g. That means, basically, at a constant speed. 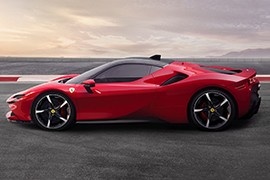