A real eye-catcher, the 2017 Ford Mustang was a luxurious, fast muscle car, available as a coupe or a convertible body style.
With a choice of powerful engines and lots of interior upgrades, accompanied by a sharp handling, the Ford Mustang was one of the top choices for convertible lovers.

Inside, high-quality materials were used throughout the cabin, however, Mustang remained truthful to its retro design with the dual-cowl dashboard. Ford made sure to add the modern technologies found in European luxury vehicles and some of the features included were standard keyless entry and keyless go, a rear-view camera, Track Apps and Sync Voice command system.

The standard seats were comfortable and provided plenty of bolstering, however, customers could have chosen the Recaro seats that increased lateral support.

Space wise, the Mustang did not have the roomiest cabin, and it was best to avoid having adults in the rear seats. The cargo area was surpassingly generous for a sports car, at least with the top up.

Those looking for the fastest ride the Mustang could offer had the choice of a 5.0-liter V8 engine that developed 435 hp. 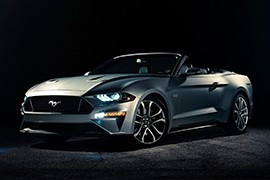