Now at its second generation and based on the same platform as its more traditional looking MPV brother, the Galaxy, the 2020 Ford S-Max has received a mid-cycle facelift at the same time as its architecture-sibling.
Traditionally seen as the most fun to drive MPV, the revised second-generation S-Max is now as stylish as ever, with Ford upgrading its exterior with the same design motifs as the refreshed Galaxy.

The model’s front-end has been completely redesigned and maintains a degree of exclusivity among the trim lines, with the standard, ST-Line and Vignale versions looking as different from each other as ever. The interior has received the same 18-way adjustable seats with the AGR seal of approval as the Galaxy. To get the highly coveted AGR seal, the seats must adapt to the passenger’s position and not the other way around, thus providing relief for back-pain sufferers on the go. Available with either 150 PS or 190 PS power outputs, the 2.0-liter EcoBlue diesel four-cylinder is identical to the one powering the pre-facelift version and is paired either with a six-speed manual or an eight-speed automatic transmission. For the first time ever, the S-Max will also be offered with an on-board modem, which turns the car into a mobile WiFi hotspot that offers connectivity for up to 10 devices. 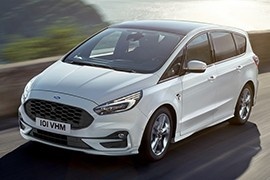