Australians needed a light utility vehicle to use it inside cities, and the Vauxhall/Opel Combo platform proved to be the right answer.
The first Combo based on the European platform from the Corsa lineup was too small for almost everything. Facing stiff competition in Europe from Volkswagen Caddy, Renault Kangoo, or Fiat Doblo, GM had to adapt the lineup. The Combo name was already known, so all it had to do was to increase the volume while keeping the price in a decent range. It did it, and, more than that, it exported the project in Down Under to be built under the Holden badge.

Vauxhall/Opel Corsa was a very well known product in Europe, and GM considered that it might be a good idea to keep the same front fascia from the small-segment vehicle. Thus, it confirmed the city-destination of the vehicle. But any visual connection with that model ended right behind the hood. A taller cabin led was needed to make a bigger cargo compartment. The designers extended the wheelbase and added sliding doors to the car. In the back, the Combo was offered with asymmetrical doors.

If judged by the front seats, the Combo was not a commercial vehicle. It featured a nice dashboard, with a CD on the center stack and even a navigation system. Unlike the shorter Corsa, the Combo offered plenty of headroom and, moreover, a storage area above the driver, good for the lunch box, some luggage, or a shotgun. Whatever works.

For the engine compartment, Holden chose only one engine option, a gasoline 1.4-liter unit. It was fuel-efficient in the city. The only available gearbox was a 5-speed manual. 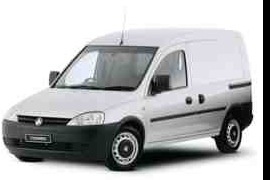