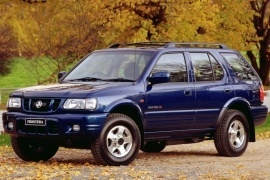 Part of a joint project developed by GM, Isuzu and Honda, the Holden Frontera was the Australian sibling of the Vauxhall Frontera, Isuzu Amigo or Honda Passport.
It was the second generation of the joint project, and everybody was happy. Isuzu found a way to sell its diesel engines on more vehicles, Honda provided the V6 gasoline units, and GM assembled all brands’ vehicles. What not to like on that kind of project, especially since the customers liked the car.

The second generation of the Frontera SUV sported a new bodywork with smoother lines than before. It was launched in the middle of the bio-design era, and the sharp lines from its predecessor didn’t seem to be liked anymore by the customers. At the front, Holden chose to install smaller headlights with rounded edges, while the grille with two vertical slats looked too close to the one installed on the Nissan Patrol. Holden offered the Frontera in a three or five-door version.

Inside, there was a touch of modern design with softer areas and rounded corners. But the dashboard design was bland. Even though it sported all the bells and whistles to make life comfortable, it was still a boring piece of equipment. In the back, the Frontera was huge, offering plenty of legroom and headroom even for a basketball player. Its split-folding rear seats allowed the vehicle to be transformed into a light family-LCV.

Under the hood, Holden chose the 2.2-liter GM engine and the 3.2-liter V-6 supplied by Honda. Both were paired to a 5-speed manual or a 4-speed automatic. Later on, Holden installed a 3.5-liter unit paired exclusively to the automatic transmission. For the diesel version, the Australians receive the 3.0-liter turbo-diesel from Isuzu.