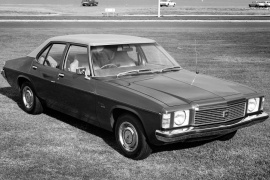 The Australian branch of General Motor introduced the HJ in 1974 as a replacement for the HQ series, but with a different front end and some posh here and there.
When it was introduced, General Motors said that this was the car Australians were waiting for, but soon the reality proved to be way different. The high priced car looked more up-market, but in fact, it was the same HQ that was dismissed for its low quality.

At the front, the square design with round headlights and a big grille with horizontal slats improved the car’s look over its predecessor, the HQ. That was the main difference from the outside between those two cars. As an option, a vinyl-covered roof was available at extra cost. To improve the rear visibility while parking on tight spots in Sidney, Holden chose the same sloped trunk lid, despite the fact that some other carmakers already changed their approach.

Inside, the HJ offered enough room for five passengers, despite the high center tunnel. In comparison, the base trim level featured only a steering wheel and ordinary seats. The air-conditioning, stereo, and cloth seats were available at extra costs.

Under the hood, the HJ featured four engine choices, ranged between a 2.8-liter and a 5.0-liter displacement. For the inline-six versions, a 3-speed manual was fitted as standard, while the V8 versions were paired to a 4-speed manual. A 3-speed automatic was available as an option.