While the American market demanded an executive premium car from Acura, the Japanese carmaker tried to sell it as a Honda in Japan and other Asian countries.
The experiment didn’t work as well as the carmaker hoped for. It proved that Asian customers didn’t share the American taste in cars. While in the U.S., a car had to offer cupholders, automatic transmission, and offer a comfortable ride on the highway. In other countries, those might not be on top of the list.

Honda introduced the fifth Legend generation in 2014 and only on selected markets. It showed a stylish, pentagonal grille that sported a thick horizontal chromed slat at the top and followed by two other slim slats. From its sides, the three-box executive sedan featured a cab-rearward design, with a pushed-back C-pillar above the rear axle and a short trunk.

Inside, a leather-clad interior proved a high level of taste for the Japanese carmaker. The dashboard featured curved lines combined in sharp angles for the instrument cluster and the infotainment screen placed above the center stack. A wide center console with wood trims and storage compartments separated the driver from its passenger. In the back, the carmaker installed a bench for three, with three headrests and seatbelts.

Under the hood, Honda offered the Legend’s fifth-generation only with a hybrid system powered by a 3.5-liter V-6 powerplant and three electric motors. 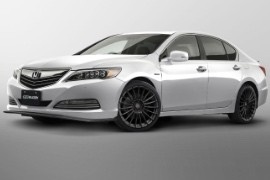