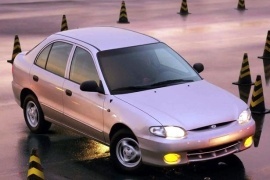 The last generation of the Excel was available in three body versions: hatchback with three and five-doors and a sedan.
It was a transition model to the Accent lineup.

It was a time of an uncertain future for the Korean carmaker. It tried different versions for different markets, and the same went with the names. While the Excel kept that name in some countries, it showed a different name in the others, such as the Accent or Pony.

Its styling was still bland, with a rounded shape. It might be one of the best examples of biodesign made by a carmaker who didn’t have a proper car design experience. Its oval, slim headlights and the slot that acted as a grille were the first signs of a carmaker that didn’t really know how to put body parts on a car and look good. At least, it wasn’t ugly anymore. Just bland.

Inside, there was a big improvement in material quality over its predecessor. The cloth seats with velour and plastic door panels were better fitted and didn’t rattle all the time. There was just a shy try to enhance the cabin by using light-gray colors and pastel color pattern on the seats. Since it was built as a hatchback, the carmaker installed a split-folding rear bench.

Under the hood, Hyundai installed two engine choices: a 1.3-liter and a 1.5-liter unit. Both were bought from Mitsubishi. 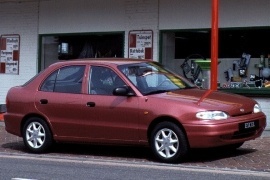 Hyundai introduced the last Excel generation in 1994 in a few body shapes, and the five-door version tried to compete against better-known small-sized European hatchbacks.
While the small sedan market was covered only by a few carmakers, most of them already had something to offer in the hatchback segment. In Europe, Fiat, Renault, Citroen, Peugeot, Opel, Volkswagen, Ford, and Rover threw a harsh competition against the young Korean brand. Still, the newcomer managed to make it through with a rich standard package and a low starting price.

The bio-design trend worked great for the Korean designers, who managed to design a vehicle with rounded shapes and soft edges. Its narrow, elliptic headlights and slim grille didn’t impress, but they were not bland either. Its back was similarly shaped to a sedan, while the wide tailgate opened the way to a spacious trunk for its size.

Inside, the Excel dropped the older, straight lines on the dashboard and adopted curves for the instrument cluster and door panels. Hyundai installed cranked windows for the base model but with an option for powered ones. The air-conditioning unit was available at extra cost for base trim level and standard for the rest of them. In the back, the split-folding bench allowed customers to expand the trunk area.

Under the hood, Hyundai installed Mitsubishi-sourced engines of 1.3-liter and 1.6-liter. Later on, on specific markets, a 1.8-liter made its way inside the engine bay.