At the 2015 New York Auto Show, Nissan’s premium luxury brand introduced the refreshed version of its biggest SUV, the QX50.
And the changes were not just for the look.

Usually, when a car model receives a facelift, it has some updates on the outside, on the inside, and maybe for the engines. But the Infiniti QX50 facelift was received a longer wheelbase by 81 mm (3,2”). That additional length was needed to provide extra legroom for the rear passengers. The QX50 was based on the previous EX crossover range.

The coupe-inspired look of the 2016 QX50 was enhanced due to its longer overall length by 115 mm (4,5”) and the new design of the front bumper. A lower front fascia and new LED daytime running lights visually enhanced the sportiness of the car.

The vehicle’s practicality was increased with a bigger length. The cargo space was slightly bigger, and it kept the optional folding and raising the rear seats from the touch of two buttons located on each side of the inner panels inside the trunk.

Under the hood though, instead of a 5.0-liter engine (as may the name suggested), it was the same 3.7-liter V6 engine mated to a 7-speed automatic transmission. The power was slightly increased up to a decent 330 hp. It was available as an RWD or all-wheel-drive model. 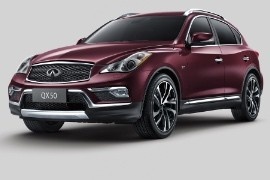