When the first generation of the Land Rover Range Rover Evoque was launched, its design made all the other SUV’s look outdated.
The revolutionary design in the premium compact SUV market looks like it lost its steam. It takes an expert eye to distinguish the second generation from the previous one. It is that similar.

In 2018, Land Rover launched the second Range Rover Evoque. It has increased in size by a few inches, but not from bigger bumpers but from the bigger wheelbase. This is actually good news since the first Evoque was often criticized for its cramped rear-seat room. While it is a little bit longer, and taller, it is narrower than before.

The new infotainment unit is very neatly arranged on the centra console, with a tilting touch-screen display. The dashboard is very clean, without buttons and controls scattered around. Depending on the trim level, the instrument cluster can be with dials or a complete TFT, which can show sat-nav info and can be configured.

Under the hood, there is a choice of 2.0-liter engines, either turbodiesel or gasoline. The power ranges from a basic 150 hp to a top of the range 300 hp unit. For some models, a 6-speed manual transmission and 2WD is available, while on the upper scale the 9-speed automatic transmission and AWD system is offered as standard. 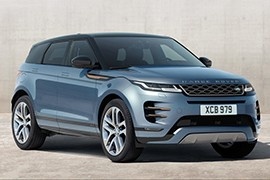