With its debut at the Geneva Motor Show in 2018, the UX was a crossover designed for the urban traffic, for people that were looking for a luxurious, fresh and dynamic experience.
With a total length of 4,495 mm, the UX was shorter than the NX, but longer than a BMW X1.

The well-thought proportions of the crossover allowed impressive manoeuvrability.

While the concept car presented in 2016 had an aggressive design, the UX dropped most of the sharp angles.

The body of the UX was mostly made of aluminum (doors, fenders, hood).

From the front, the imposing radiator grille stood out, along with the arrow-shaped daytime running lights. The center badge had a 3D look that changed depending on the viewing angle.

The LED strip incorporated in the stoplights made a huge impression, the strip consisting of 120 LEDs.

4 different alloy designs were available, with dimensions ranging between 17 and 18 inches.

The interior design was perfectly crafted with premium leather upholstery (upper trims) and a beautifully finished dashboard inspired by the Washi (Japanese paper).

Space wise, the cabin was very roomy, with enough space even for the passengers in the 2nd row.

The UX was built on the TNGA platform (a version designed for compact cars such as the Prius, C-HR and Auris). 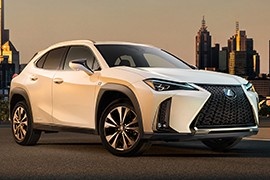