Since more and more customers were looking for 7-seat vehicles in the SUV segment, but not very large, Mazda introduced the CX8 model, which was placed between the CX5 and the larger X9.
As most of the car-makers, Mazda chose to build specific products for specific markets. Due to the high demand for 7-seat vehicles in the SUV segment in South-east Asia, China, and Oceania, the Japanese car-maker introduced the CX8 model, especially for them.

The CX8 featured the same front design of a CX5, but with a different grille design. The headlights, daytime running lights, and foglights were LED-equipped. It featured the same wheelbase as the CX9, but slightly shorter in the overall length.

Inside, the CX8 was fitted as standard with 6 or 7 seats, depending on the engine and trim level. For those fitted with 6, the middle row featured captain seats, either with a passage between them for the rear seats or with a center console. The dashboard featured a minimalist design, with rounded flat surfaces. The 7” infotainment system featured Apple CarPlay and Android Auto connectivity and the instrument cluster featured three round dials that resembled the former generation of the CX5.

The CX8 was fitted as standard with a 6-speed automatic transmission for both engines available. It was offered either with a front or all-wheel-drive system. 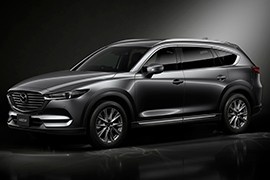