In 1996, Mercedes-Benz released the SLK and caused a sensation.
20 years later, the SLK was released with a new name. In 2016, the old SLK became the new SLC-Class in order to align with Mercedes-Benz’s new nomenclature scheme.
The first initials mean the same thing - Sport Leicht (German for “Sport Light”) - while the letter C means the model is based on the C-Class. However, the 2016 Mercedes-Benz SLC (R172) was not entirely new, being a facelifted SLK.
Changes included redesigned front and rear ends, with up-to-date bumpers, headlights, grille and stoplights. New rims and color options were part of the change as well, while the interior got a new steering wheel, redesigned seats, center console and dashboard. The car was equipped with heated seats and AIRSCARF, a neck-heating system that was available as an optional. The interior was luxurious and two new colors were available for the perforated Nappa leather.
The infotainment gained new features and the optionals list grew a few more entries. The folding roof operated up to 40 km/h and there was a new automatic trunk separator. Other technical features included Active Brake Assist which was installed by default.
An interesting feature that was still unique and characteristic to the SLC was the panoramic vario-roof with Magic Sky Control – the driver and passengers had the possibility to lighten or darken the glass roof at the touch of a button. 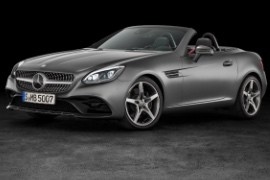