Mercedes-Benz replaced the N21 model in 1937 with the Typ 230 N, W143 model to make the car attractive for more people, but it was hardly a successful vehicle.
Mercedes-Benz introduced the Typ 230 N on the same chassis as its predecessor and with the same wheelbase, but the bodywork was longer. That led to a somehow disproportionate design with a very long rear overhang. The German carmaker realized that and introduced, as an option, a long-wheelbase version which proved to be more successful on the market. From 1938, Mercedes-Benz dropped the N (short-wheelbase) version.

The bodywork was sleeker than on the N21 model, with a slightly raked, pined-out radiator. Unlike more expensive Mercedes-Benz models, the Typ 230 N featured wheel-arches mounted headlights. At the bottom, its chromed and profiled metallic bumper was completely different than on its predecessor. In the back, the slightly racked-forward rear end made room for a luggage compartment, which was accessible from the outside.

Inside, the car was quite roomy for four adults. Its front, rear-hinged doors helped its occupants get out easier than most of the other four-doors sedans on the market. That was one of the reasons why the special Nazi forces used the Typ 230 N.

Under the hood, the German carmaker installed an inline-six engine with a 2.3-liter displacement, hence the car’s name, that provided 55 hp. It was paired to a four-speed manual gearbox. Mercedes-Benz installed an independent suspension with leaf-springs in all corners to provide more comfort and a better cornering speed. 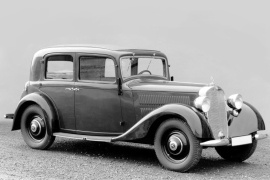