The 2018 AMG A35 was a true hot-hatch.
Even if it wasn’t the top-spec AMG from the A-class, it was considered to give a better balance and enough everyday performance.

When compared to the regular A-Class, the first noticeable detail was the grille with a big, chromed horizontal line and the big three-pointed-star badge in the middle. On the bumper, the lower splitter and the side-scoops were big and inspired some performance. It featured LED headlights as standard. To channel the air-flow, the aerodynamic package was completed with side sills and a roof spoiler. A small wing was offered as an option. Under the rear bumper, a dual exhaust helped the engine breath better.

Inside the cabin, the AMG was true to its words with race-inspired bucket seats. The AMG Sport steering wheel featured a metallic paddle-shifter behind it. On the dashboard, two large displays were under the same protective glass and gave the impression of one, big, screen. It incorporated the configurable dials for the driver and the infotainment system as well.

For the tech-side, the four-pot engine under the hood featured a twin-scroll turbocharger that was built for small turbo-lag. The AMG SPEEDSHIFT DCT 7G dual-clutch was installed to cope with the powerful engine. It sent the torque to all four wheels via an intelligent and electronically controlled all-wheel-drive system. To keep the car planted on a race-track or comfortable on the daily drives, the AMG A35 featured an adaptive suspension with three settings. 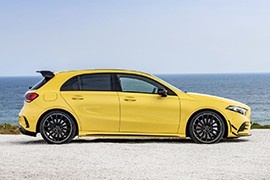