Mitsubishi was the most notorious competitor in the harsh Paris-Dakar Rallye-raid, which it won 12 times with the Pajero.
The street version also won a reputation for reliability.

The Pajero, which was also known as Montero in Spain and other Spanish-speaking countries, or Shogun in the U.K. started its journey in 1981 with the first generation. It was a body-on-frame construction. The third generation was introduced in 1999 with revolutionary unibody construction and an integrated ladder frame chassis. That construction type was carried over to the fourth generation, which was launched in 2006 at the Paris Motor Show.

The flared wheel arches and the sloped roofline were unusual for a true off-road vehicle. A three-slat chromed grille was introduced and bigger, taller headlights were installed. It was offered in a 3-, and 5-door version. The former was offered as a 5-seat only and the later was fitted with 7 seats. The spare-wheel was kept on the rear trunk door.

Inside, the Pajero featured a newly designed dashboard, with a big instrument cluster. The center stack hosted the infotainment unit and an additional LCD for the on-board computer. There was plenty of room for three adult passengers on the middle row and limited for the third.

The technical platform was the one that brought the Pajero under spotlights. It was the only 4x4 vehicle in the world that featured a 4x4 on-demand system which could have been driven as an all-wheel-drive vehicle since it was fitted with three differentials. The central and the rear one could have been locked for better traction. For the engine bay, the manufacturer installed either a 3.2-liter turbocharged diesel or 3.8-liter gasoline. Both versions were mated as standard with a 5-speed manual, while a 5-speed automatic was available as an option. 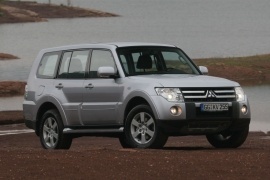