The second generation of the Insignia was unveiled at the International Motor Fair Trade in Belgrade.
It was an unusual location for Opel to show its newest model.

The Insignia Sports Tourer GSI was the sportiest version of the Insignia station-wagon. It featured a slightly different outside design. The front fascia was more aggressive. A black mesh was on the grille and, in the bumper, there were side air-scoops and a lower lip. On the sides, the aerodynamically profiled sills and the sculptured door panels amplified the sporty image of the car. In the back, two chromed exhaust tips and a roof-spoiler filled the GSI style.

Inside, the alien-look of the sport-bucket seats promised great side support. In the rear, due to a long wheelbase, there was more than enough legroom for three passengers. The trunk was among the biggest in its class.

The Insignia GSI was available with a gasoline or a diesel engine, both turbocharged and mated with an 8-speed automatic gearbox. The all-wheel-drive system was equipped with a torque vectoring aid, that helped the driver for high-speed cornering. 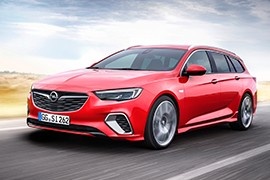