Peugeot returned on the pickup market with the 2017 Pick Up model, based on the Chinese Dongfeng Rich light-utility vehicle.
The French carmaker had a long history of pickup vehicles in Africa, with models that dated back to 1956. Over time, it lost its interest in that segment since the development cost began to rise and the market was not that big. But its Chinese partner Dongfeng had a license for the Nissan Navara N22, which is already built and sold as Rich pickup.

At the front, the Pick Up featured a flat front fascia with a three-slat vertical grille that supported the chromed Peugeot’s Lion badge. Its bumper featured a lower grille flanked by a pair of scoops that hosted the daytime running lights and the fog lights. It was easy to recognize the shape of the N22 Nissan Navara due to its flared wheel arches from its sides. The tailgate sported the stamped Peugeot brand name, as on its former 404 and 504 models.

With its full-size, four-door cabin, the Peugeot Pick Up featured a five-seat interior with two seats at the front and a bench in the back fit for three adults and adequate legroom. At the front, there was a straight dashboard with a raised center stack that hosted the radio on top and the climate controls lower. The carmaker installed larger dials for the speedometer and tachometer on the instrument cluster, flanking an LCD for the onboard computer.

Under the hood, Peugeot installed a 2.5-liter turbo-diesel that provided 115 hp. It was paired to a standard five-speed manual gearbox and an option for a 2WD or 4x4 system. The latter featured a transfer case with high and low-range gears. 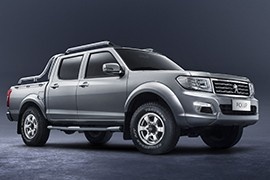