When it was introduced in 2002, the Cayenne Turbo offered 450 hp and it was considered one of the best sport-SUV on the market. It was offered with an off-road package as well. Over time, since the customers were not interested in that option, it was deleted from the list.

The exterior of the 2014 Cayenne was enhanced with a sharper design and clear lines. The front fenders, the grille, and the headlights were entirely new, with LED for daytime running lights and, for the Turbo version, full-LED. The grille was still divided into three main areas, with the biggest one kept for the engine. The underbody aluminum shield was replaced by a black plastic one. In the back, the roof-spoiler became a standard fit for the entire range.

Inside, the connection with the 911 range was more obvious due to the five-dials instrument cluster and the centrally-mounted tachometer. The new, tall and slim, air-vents were inspired by the Panamera sedan, but on the center console, the buttons from the PTM system were an updated version of those found in the first generation Cayenne.

Under the hood, the revised engine offered 20 hp more than its predecessor. It was the same twin-turbo 4.8-liter V8 unit and it was paired to an 8-speed Tiptronic (automatic) transmission, with manual override to select gears. For the suspension, while the rest of the range was offered with steel-suspension fitted as standard, the Turbo version featured the upgraded version with air bellows. 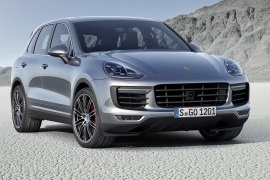