Porsche made a bold move when it introduced the full-electric Taycan model in its range, and then, in 2021, it raised the stakes with the Cross Turismo version.
Porsche had its customers and didn’t see any reason to rush its electrification process. Even though its automotive engineering experience was among the highest on the market, it didn’t rush. It started with hybrid versions for the Cayenne and Panamera, and then it shook the supercar world with the 918. When it came to the production model Taycan, it showed its muscles. It proved that it could build a supercar with four doors and no exhausts. Then, in 2021, it unveiled the Taycan Cross Turismo as a long-range electric vehicle.

The Taycan Cross Turismo showed a similar front fascia as the four-door sibling, but the black molds on the front apron revealed its crossover intentions. On the sides, the black moldings continued on the wheel-arches and the door’s sills. The extended roof and hatchback style ending resembled the Panamera Turismo style with a curved, raked-forward tailgate.

Inside, it showed the same dashboard design with a dual-screen system: one for the instrument cluster and the other for the infotainment system. Porsche’s designers added another touch-screen on the center stack’s sloped side for the climate control functions. Its bucket seats with high bolstering showed its connection with the brand’s motorsport heritage. In the back, Porsche installed a split-folding bench profiled for two but with three headrests. It could expand the trunk area up to 1200 liters (42.3 cu-ft).

Unlike its Taycan sibling, the Cross Turismo version featured an adjustable suspension that allowed the driver to increase the ground clearance by 30 mm (1.2”) and introduced a gravel mode all-wheel-drive system. 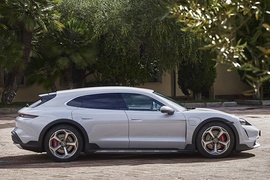