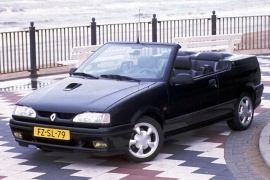 Renault introduced a facelift for the 19 range in 1992, and that included the convertible version, which was only two years old on the market.
As the compact-segment started to be more important, the French carmaker tried to make push harder with the 19 range, which was available as a three- and five-door hatchback, a sedan, or convertible. The latter was introduced in 1990 and was fighting against the Escort and the Opel/Vauxhall Astra convertible since the Golf IV was not yet offered with a rag-top.

Renault developed the convertible version together with the German coachbuilder Karmann. Its new front fascia included rounded edges and grille, with fog-lights in the front bumper fitted as standard. The most powerful version, named 16V or 16S depending on the market, sported an air-intake on the hood’s right side, regardless of the driving post. The coachbuilder made a unique fiber-glass panel with two domes behind the rear seats, which covered the canvas-top when it was retracted.

The car was built on the same platform with the three-door hatchback and sported the long doors. Inside, Karmann moved the rear seats forward to hide the roof behind them, leading to smaller rear legroom than in the hard-top version.

Renault installed only its top engines under the 19’s hood, with a 1.8-liter displacement, with two or four valves per cylinder. Its standard transmission was a five-speed manual, while a four-speed automatic was on the options list. 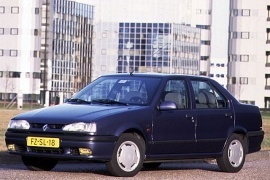 After just three years on the market, the Renault 19 went through a mid-life cycle refresh that improved both the car’s look and the drivetrains.
With a new vehicle range on the pipeline, the French carmaker didn’t want to invest too much in the 19 model. On the other hand, Renault couldn’t just leave the range and still hope for higher sales figures. That’s why it introduced a facelifted version that lasted only for a few years on the main markets, while its Turkish factory kept producing the R19 under the name R19 Europa until 2000.

In 1992, the market increased thanks to the new customers from Eastern Europe. Renault tried to lure them, and the 19 sedan was an excellent contender for them. In their culture, the three-box version was the right one. Its new grille featured a redesigned grille, with two openings that flanked the rhomboidal Renault badge placed in the middle.

Inside, the dashboard was still angular-shaped but with softer materials and rounded corners. Its rectangular vents on the center stack and on the dashboard’s sides. The new, two-spoke steering wheel didn’t look that harsh as the one installed on the non-facelifted version.

Under the hood, Renault brought an extensive engine range, both gasoline and turbo-diesel powerplants. The 1.8-liter unit was new, while the 1.7-liter was closing to the end of its manufacturing life. 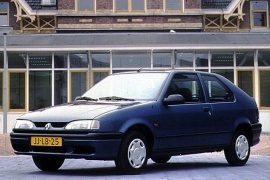 First unveiled in 1988, the Renault 19 received the first facelift in its history in 1992 when the French car manufacturer restyled both the 3- and the 5-door hatchbacks.
The car had a new front and rear while the interior received major upgrades only on the left-hand drive models. However, the right-hand drive Renault 19s were still equipped with the old-style interiors until the car model was taken off the market. The engines were also upgraded, this time ranging between 1.4-liter 60 hp and 1.9 TD 92 hp. The most powerful engine in this range was the 1.8-liter which produced 137 horsepower and a maximum speed of 211 km/h. 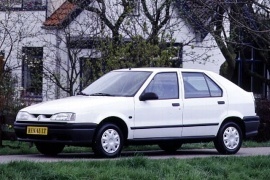 Renault introduced a facelifted version for the entire 19 range in 1992, including the hatchback versions with three or five doors.
The French carmaker didn’t want to spend more money on the Renault 19 since it had plans to replace the lineup with a new range. Still, it couldn’t leave the exact vehicle and expect to sell it in significant numbers, while its competitors already prepared new models, not just facelifts.

In 1992, the market increased thanks to the new customers from Eastern Europe. Renault tried to lure them, and the 19 model was an excellent contender for them. The five-door hatchback was a mix between a family sedan and a station wagon. Its front fascia received new, re-shaped headlights, rounded on the inboard, and a redesigned grille. The era of bio-design already started, and the angular shapes were not trendy anymore. At the back, there were new smoked taillights that looked sportier than on the non-facelifted version.

Inside, the dashboard was still angular-shaped but with softer materials and rounded corners. Its rectangular vents on the center stack and on the dashboard’s sides. The new, two-spoke steering wheel didn’t look that harsh as the one installed on the non-facelifted version.

Under the hood, Renault brought a very wide engine range, both gasoline and turbo-diesel units. The 1.8-liter unit was new, while the 1.7-liter was closing to the end of its life. 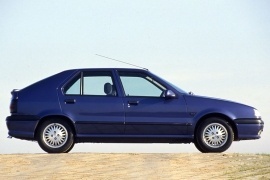 Renault stepped up its game when it introduced the 19 range and came on the compact segment with a wide range of bodyworks, from a family-oriented four-door sedan to a youthful convertible.
When the French carmaker introduced the Renault 16 back in the mid-’60s, it proved that a hatchback-style could be a better solution for most problems. That idea was carried over by other carmakers and became a common feature for the compact and the small segment vehicles.

In the late ’80s, Renault unveiled the 19 range in four body shapes, which was unusual for the French brand. In the five-door version, it combined the practicality of a station wagon with the look of a sedan. For the compact segment, that was the most attractive version for families with children. Its rectangular headlights matched the late ’80s design trends. Depending on the trim level, the 19 featured black or body-colored plastic wrapped-around bumpers with or without fog lights.

Inside, the 19 offered adequate room for four people, but the bench was uncomfortable for three adult-sized passengers. At the front, the bucket seats were designed to provide enough comfort. Renault installed just the minimal dials and gauges on the dash panel while offering the tachometer on the options list. No power windows or air-conditioning were fitted as standard. Those were available as an extra option and not on all engine versions.

Under the hood, Renault installed a wide engine choice, either gasoline or diesel. For specific markets, it offered it with a three- or four-speed automatic transmission. 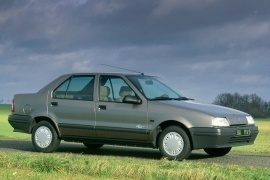 After a few years on the market, the 19 received a well-deserved facelift in 1992 for the entire range, including the sedan version, which also got the Chamade nameplate.
When the East European market opened after their revolutions, the French carmaker tried to get most of the market with affordable products. For that, Renault started producing the 19 Chamade in Turkey since it lowered its production costs.

In the former communist countries, the sedan versions were seen as upmarket vehicles, and Renault understood that quickly. So while other carmakers tried to sell just trimmed-down versions of their hatchbacks, the state-owned French carmaker came with a proper sedan.

At the front, the 19 Chamade featured a set of refreshed headlights that sported a rounded design, while the rear received smoked taillights and the chromed “Chamade” badge on the trunk’s lid. Thanks to its three-box shape, the car was well received on the East-European market but didn’t excel in front of the western customers, who were still more attracted by hatchbacks.

Inside, the dashboard was still angular-shaped but with softer materials and rounded corners. Its rectangular vents from the center stack and on the dashboard’s sides received a new design. The new, two-spoke steering wheel didn’t look that harsh as the one installed on the non-facelifted version. Hard-plastic materials and cheap upholstery helped the carmaker sell the vehicle at a very low price.

Under the hood, the carmaker placed a 1.4-liter gasoline engine paired to a five-speed manual as the base version. Then, for Western customers, it added the 1.8-liter while the 1,9-liter oil-burners were more appealing for fleet owners. 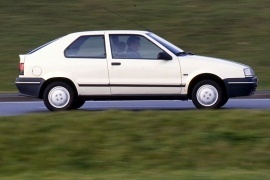 It was the last Renault that wore a number instead of a name and it replaced two models in the Renault compact lineup: the 9 and the 11.
And it was the first Renault available in four body versions: 3-door hatchback, 5-door hatchback, convertible and sedan.

The three-door version of the Renault 19 was the sporty version or the utilitarian version. In France, the vehicles with two doors were often sold without rear seats as “utility vehicles”, thus avoiding some taxes. Afterward, the owners just had to install new seats in the back and that was it. Renault 19 was the model that started with an old-school engine with on-head valves and a carburetor and ended up with 16 valves, twin-cam and fuel-injected modern engines.

The vehicle was a big step ahead and its name was a link to the successful Renault 18 from the late ’70s. A new, modern design, with rectangular headlights and rounded edges, was just in the late 80’s trend. Meanwhile, the sporty look of the three-door hatchback with enough room in the back and a decent trunk was supposed to attract many customers. But the three-door version wasn’t such a success.

Inside, the Renault 19 offered as standard only power steering and brakes. No power windows or air-conditioning. Those were available as an extra option and not on any engine version.

Under the hood, there were numerous variants, including diesel versions and the top 140 hp gasoline engine for the Williams version.