This is the best selling model in the c-SUV segment in Europe.
It pioneered this segment and now it owns it. Actually, it is so well sold that it will be manufactured in China, where Renault has a very important market.

When it was launched back in 2013, it didn’t have too many engines and variants. It was based on the B platform from the fourth generation of the Clio.

The 2020 model is based on the fifth generation of the Clio platform, the same used for Nissan Juke. On the outside, there are new headlights, in the same style with the compact class Megane and the Clio. A bigger interior was possible due to the CMF-B platform, which is modular and can be extended.

For the engines, Renault announced that a plug-in version will be made. Thus, this will be the first car in its segment with a plug-in hybrid version. The other engine choices are either gasoline or diesel. Their power will range between 100 and 155 hp. No all-wheel-drive version was announced.

Inside, there is a new interior with more focus on infotainment and passenger comfort. In front of the driver, in the instrument cluster, there is a TFT screen that can show turn-to-turn navigation and various other information for the driver. On the center console, there is the EASY LINK infotainment system. It is available in two sizes of 7” and 9.3” and supports Android Auto and Apple CarPlay. The sound system is signed by Bose. 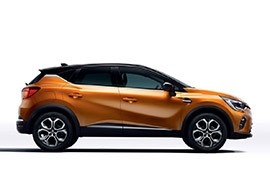