The French car-maker tried to offer a very low priced car for the Indian market.
But the car had to offer the Renault minimum standards. The Kwid was the answer.

Renault had a big interest in the Indian market. With over a billion population, India was a highly competitive market for low-priced cars. After the partnership with the local car-maker Mahindra ended, the French car-maker approached the market with a supermini car priced at Indian (very low) prices. It was a car assembled for already developed parts for other cars.

The Kwid featured an SUV-inspired front fascia, with a big grille design and Dacia Sandero inspired headlights. The black moldings over the front and rear wheel-arches amplified the cross-over stance. India was known for its bad roads, so the Kwid came equipped with higher ground clearance and a shrunk-SUV style. The side doors featured curved surfaces and, depending on the trim level, plastic side protection against shopping carts.

Inside, there was a simple, one-piece, dashboard. On the base model, there was just a speedometer on the instrument cluster and no stereo on the center stack. A Medianav Renault system was included on the options list.

For the drivetrain, the Kwid featured a 0.8-liter, or a 1.0-liter engine, mated to a standard 5-speed manual. In Europe, it was expected to be built by Dacia, the most affordable brand in the Renault Alliance. 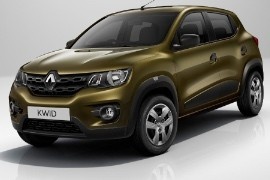