After 2 years of absence from the shows, in 2016, Spyker unveiled its C8 Preliator at the Geneva Motor Show.
The C8 reached its 3rd generation on the sports car market and was the successor of the C8 Aileron.

For the ones who don’t know, the Spyker company came to life as an aircraft manufacturer, the reason why the C8 was an aircraft-inspired car. The company’s logo represented a wheel with a propeller.

The new C8 came with an improved chassis and the supercharged V8 engine developed 525 hp. Many would’ve expected that a 2016 sports car would’ve been equipped with an automatic transmission, however, the C8 had a manual one.

The interior was completely redesigned, using honeycomb stitches to match the grille’s model. The exterior paint was actually an aircraft color with a satin finish.

The sports car’s air inlets were turbine-shaped and the rear lights were also inspired by planes, having the shape of an afterburner belonging to a fighter jet’s jet engine.

The nameplate of “Preliator” came from Latin and stood for “warrior” – the company had gone through ups and downs and managed to succeed with only a small team of near 10 people.

The Preliator was produced in 50 units only, and as they said, having an exclusive unique car meant that the chances to see another car like yours at the stop were almost 0. 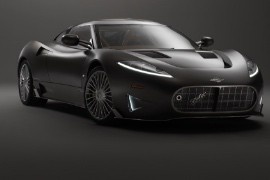