Wiesmann introduced the MF4 Roadster in 2010 at the Geneva Motor Show, and it proved to be one of the best modern-classic vehicles on the market.
While some people are taking old cars and install new drivetrains inside, Wiesmann designed the car from the ground up. With a new chassis and modern suspension, it was much easier to make the car corners faster than a re-engineered one. It also used modern alloys and technologies for the chassis and bodywork.

The MF4 Roadster might have resembled a British roadster. Its grille revived memories about a Jaguar or, maybe, an Alfa Romeo. Its headlights featured four rounded lamps used for high and low beams and the turn-signals. From its sides, the Coca-Cola bottle design showed its lowest point on the door, with the handles at the same level as the front and reared upper lamps. In the back, its three-lamp design, plus the fog-light and the reversing lamp flanking the license plate, emphasized the car’s classic look.

Like all the Wiesmanns before, the MF4 Roadster was hand-built piece by piece. Thus, there is no wonder that it’s interior looked like custom-made luxurious furniture. Apart from the infotainment’s screen and the instrument panel, everything else was upholstered in leather. The dashboard, the center stack, and the center console sported the same expensive material. With its dials and gauges installed in the middle of the panel and the warning-lights panel placed in front of the driver, Wiesmann managed to blend the old and the new in a luxurious and functional blend.

Under the hood, the German car manufacturer installed a 4.4-liter V-8 supplied by BMW. It was paired to a standard six-speed automatic gearbox and sent all the power to the rear wheels. 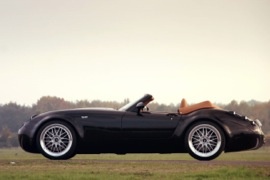