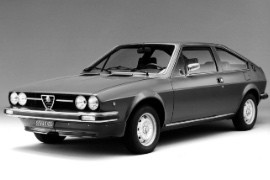 When the Alfa Romeo opened its new factory in southern Italy, it did it under a new name: Alfasud (Alfa-south).
The new factory was meant to be for front-wheel-drive cars only. And, as an Alfa Romeo factory, it had to have a sporty model, and that was the Alfasud sprint in 1976.

The design was signed by Ital Design Giugiaro, the same designer that signed the Golf 1. It was the coupe version of the Alfa Romeo AlfaSud and it featured the main general lines as the Alfa Romeo Alfetta GT, which was designed by the same studio. The flat hood and four rounded headlights were followed by a raked windshield and, right after the front seats, the roof descended into a slope to the rear. The car was a 3-door vehicle, but it was still considered as a coupe. The bumpers were chromed with a rubber strip in the middle.

The interior was fit for four passengers. For the dashboard, there was a simple design. The basic trim level offered only a ventilation system with sliders and four vents. In front of the driver, the instrument cluster featured five gauges for speed, revs, oil pressure, coolant temperature, and fuel level.

Under the hood there was a range of 4-cylinder boxer engines. The basic version had a small power output, but that was changed along with the car’s career when new, “Quadrifoglio Verde”. Worth mentioning that it had a 5-speed gearbox right from the production start.