2019 was a busy year for Aston Martin.
After they showed their pace in racing, they entered the market with some new limited edition models such as the Rapide AMR. This limited edition Rapide was shown at the Geneva Motor Show in March 2019.

AMR stands for Aston Martin Racing and their win at the 2016 edition of the 24h of Le Mans grew their wings even more. They showed a concept-car previewing the model at the 2017 Geneva Motor Show, and the limited production series version looks almost the same.

Stopping help comes from carbon-ceramic brakes, which are offered as standard with a 400 mm diameter on the front and 360 mm in the rear.

The interior is filled with luxury items, in the Aston Martin way. The stitches are matching the exterior color, either in AMR Lime or Galena Silver. The center console is made from carbon fiber and the seats are covered in Alcantara. As an option, the Rapide AMR can be ordered with a One 77 steering wheel. Starting price-tag is $240,000 in the U.S. or GBP 194,950 in the UK. 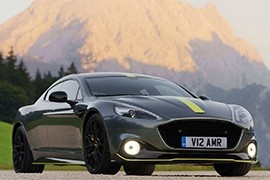