The first Q3 was released to the public in 2018 and since then over 1,1 million units were sold worldwide.
More expensive than the Q3, the Q3 Sportback was built on the same platform as its twin brother, the Q3, however, the roofline was lowered by 3 cm and its length was increased by 1,5 cm.

The exterior designed was refreshed with a new bumper, a fake rear diffuser and new exhaust. From the side, the Q3 Sportback looked a bit like the Bentley Bentayga due to the lines on the back continued to the side. The front of the coupe SUV was different as the grille was refreshed.

The interior remained pretty much the one we already knew from the previous Q3 model. The interior design of the Q3 Sportback was rather unconventional with a dashboard wrapped up in Alcantara leather, as well as the door panels. In contrast, some of the materials used look cheap for an Audi.

A large central infotainment system was available, with in-built sat-nav and other features such as Apple Car Play and Android auto.

The Q3 Sportback offered new safety systems such as auto emergency braking, adaptive cruise control with lane keeping and a 360 camera with a full view of the surroundings. 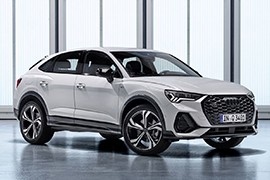