Sophisticated, a real head-turner with a classy-sporty design, powerful and refined are the words the describe the 2016 Audi S5.
Available in coupe or a convertible body style, both versions were offered with two trim levels: Premium Plus and Prestige.

While the Premium Plus offered lots of comfort equipment such as tri-zone automatic climate control, heated power front sport seats and driver memory functions, it lacked one of the most desired feature, Bluetooth audio streaming. With the S5 being around for quite some time, it still kept the Audi’s proprietary digital music interface that became a bit dated. Bluetooth audio could be added with the optional Technology package for extra cost.

Stepping up to the top-of-the-range, the Prestige trim level added adaptive headlights and included the Technology package that came with Bluetooth streaming audio, a navigation system, a larger display, front and rear parking sensors, a rearview camera and a blin-spot monitoring system.

Many other features were bundled into packages such as the Driver Assistance package, the Black Optic package and the Comfort package. 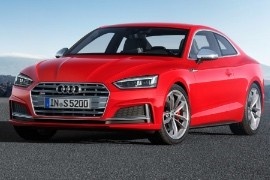