When you are undecided if you want a sporty wagon or a sedan, you can always choose a fastback-like sedan as the Audi S7.
The frame-less side-windows, the sleek sloped back and the sporty style of this body has attracted a lot of fans. It has enough room inside for five people, a big trunk and a mean aggressive look. Compared with the S6 or S6 Avant, the S7 Sportback is lowered with 10 mm (0.39 in) compared with the A7 Sportback which already sits lower than the regular A6.

Even though there is enough room for five adults, S7 has the rear bench arranged as a two-seater with a center console where nobody can sit on.

The center console for the driver hosts the gear-lever, which looks like a throttle from a speed-boat. All in all, the 2019 Audi S7 Sportback is a fast car with a proper fast look compared with its siblings the S6 and S6 Avant, which are better for those who wants to go unnoticed.

For the U.S. market, the 2019 Audi S7 is fitted with a gasoline TFSI engine V6. Its 2.9-liter mill makes due with an electric supercharger and a turbocharger, which push the power bar up to 450 HP and 600 Nm (442.5 lb-ft) of torque. The arrangement is also aided by a 48-Volt architecture. 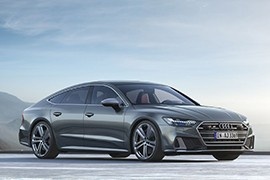