Its design started with a contest held by the Russian carmaker Marussia and the NAMI (the Russian Federation). The result was a car that resembled an old ZIS (Russian luxury sedan for top-communist members) and a Chrysler 300 C. Its design was further refined and ended-up resembling a Rolls-Royce Ghost. The tall grille with the Aurus badge at the top and the LED headlights were just a few elements that made the car stood apart from the rest of the cars.

The Senat L700 featured an additional body panel between the front and rear doors in the long-wheelbase shape, which included a window between. Its interior was custom made and showed a leather upholstery for all seats, door panels, and armrests. Its dashboard featured a screen for the driver and an additional for the infotainment center, which NAMI entirely developed.

For the drivetrain, the Russian carmaker worked with Porsche in developing the twin-turbocharged 4.4-liter V-8 hybrid system. Its all-wheel-drive system made the vehicle fast enough for its size. 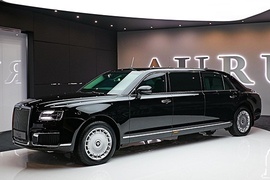