A limited edition of just 12 units of Bentley Mulliner Bacalar will be made.
It is, somehow, a pity since the big convertible looks just drop-dead gorgeous. It has two seats and a special bodywork built by the oldest coachbuilder that still exists in the world, Bentley Mulliner. The name Bacalar has been borrowed from the Bacalar Laguna from the Yucatan peninsula.

The special two-seat convertible has a handcrafted bodywork and every single unit will be built in Crewe according to each customers’ specifications. All 12 units have already been sold to customers around the world. Not a single body panel is shared with other Bentley models. The full-LED headlights and taillights, the 22” light-alloy wheels or the paint are completely different than those found on other Bentleys.

Inside, the materials used to build the Bacalar comprise natural British wool and 5.000-year-old Riverwood from the ancient Fenlands of East Anglia, for the dashboard. Each car also features a unique clock face with individual one-of-12 badging.

Under the hood there is an enhanced version of the 6.0-liter W12 TSI engine. It produces 659 hp and 900 Nm (667 lb-ft) of torque. The all-wheel-drive system is modified from the others used on the rest of the Bentley lineup. It is biased more towards the rear wheels and, if the grip and traction values require, more torque is redistributed to the front wheels. 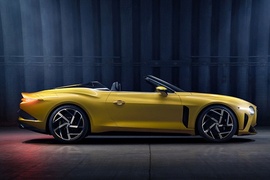