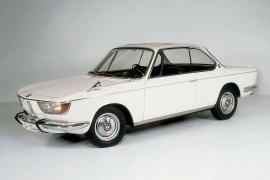 As showed by its official designation, the 2000 CS was developed as a Coupe Sport variant of BMW’s 2000 coupe model.
The two models featured different exterior styling, as the Coupe Sport received a controversial new front grilles and headlights. It also benefited from a 2.0-liter 4-cylinder inline dual-carburetor engine delivering an improved 120 hp and mated to a 4-speed manual transmission.

A year after the launch of C/CS coupes, BMW extended its model range with the introduction of a 4-door 2000 sedan. The production of the 2000 Coupe Sport was ceased in 1969, when replaced by the new 2800 Coupe Sport.