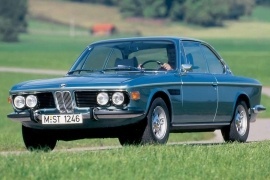 When BMW introduced the so-called “Neue Classe,” it introduced a new generation of vehicles that eventually saved the Bavarian carmaker, and the 3.0 CSI was part of them.

BMW introduced the E9 in 1968 with a regular, 2.8-liter carburetor engine. In 1971 it introduced two versions based on the same bodywork: the 3.0 CS and the 3.0 CSI. The latter was a daring move towards the fuel injection systems, which were not that common at those times. It was a checkpoint for the glorious 3.0 CSL, a car that won six European Touring Car Championships.

Wilhelm Hofmeister signed the car’s design and created the unique shape of the C-pillar, later known as “The Hofmeister kick.” He made a streamlined bodywork with a raked-forward front fascia which sported four headlights and a black grille. In the middle, he placed the chromed trims for the “kidney-grille,” which was another basic design pattern used by the German brand. Thanks to the frameless doors, the E9 was considered a fake cabriolet. With all the windows rolled down, there was no B-pillar between the A- and C-pillars.

Inside, the E9 featured two bucket seats at the front and a bench profiled for two adults in the back. The carmaker installed safety belts for all four occupants. In front of the driver, the carmaker installed the four-dial instrument cluster, while on the passenger side, there was a wide shelf. A center console filled the space between the front seats and sported the buttons for all four power windows.

Under the hood, BMW installed an inline-six engine fed by a Bosch D-Jetronic injection system. It provided 200 hp, and it sent them to the rear wheels via a four-speed manual transmission. For the U.S. market, the German carmaker offered a three-speed automatic gearbox.