At the 2019 Geneva Motor Show, the exclusive super-car manufacturer Bugatti brought a new model, called “Le Voiture Noire” (The black car).
This is a one of a kind car, and it was already sold for 11 million (plus taxes) euros before it was even showed.

The “La Voiture Noire” is an homage to the mighty Bugatti 57 SC Atlantic. It is bigger than the well known Chiron but shares the same engine. With the new model, Bugatti shows a connection with its tradition as a coach-builder. This new vehicle was ordered after the Chiron model was shown and one special Bugatti enthusiast wanted a one of a kind vehicle. The “La Voiture Noire” is the answer.

The model’s new bodywork was specially designed to resemble the mighty 57 SC Atlantic but from a modern perspective. The sloped rear end and the flared rear-wheels arches are also inspired by the famous Bugatti supercar from the ’40s.

With a reshaped bodywork and the same powerful engine, the unique model is the most expensive new car ever. With the same money, you could have bought 20 Rolls-Royce cars with some options. The engine is a W16-cylinder with an 8.0-liter displacement and four turbochargers. The total output is 1600 HP and the transmission uses the same double-clutch system as the Chiron. The performance numbers were not communicated officially but we would bet for some figures close to Chiron’s. 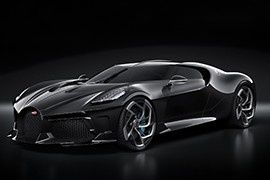