The Caterham CSR is considered by many the most powerful and track-oriented car form the British manufacturer’s lineup.
The CSR underwent the most modifications from the lineup, but still retains the classic look of the Super Seven. The model comes in three versions, the CSR 200, 260 and Superlight, with the latter being some 25 kgs. lighter and having no wind shield. The CSR is powered by a 2.3-liter Cosworth Duratec that develops either 200 or 260 hp. The car received numerous awards and praises from automotive critics from around the world and since 2006 is also available in the USA. 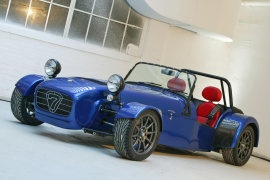