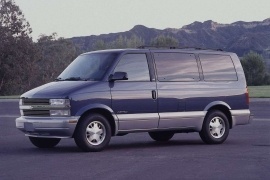 Although it remained in production for no less than 20 years, Chevrolet’s Astro has never been a popular vehicle, with technical problems always affecting sales and forcing buyers to look for alternative models.
However, the 1994 version represents the second generation Astro which included a redesigned dashboard, now featuring a passenger side airbag, plus a bunch of new exterior styling parts. The vehicle remained pretty much the same until 2005 when parent company General Motors decided to cease the production of this model, influenced by continuously decreasing sales on most emerging markets.