Chevrolet introduced a facelifted version for the Blazer SUV in 2022, and it improved the SUV in many areas, updating this beloved vehicle.
While there is no comparison between the 2022 Blazer and the original K5 Blazer in terms of off-road performance, there was more to say about comfort and safety. Where the modern-era Blazer shined, the former trail-warrior lacked.

From the outside, the SUV received new LED headlights, daytime running lights, and taillights. It also boasted a new front fascia, with stylized mesh-grille expanded on the lower bumper area, to the apron. It was flanked by a pair of scoops where the carmaker placed the fog lights. Another upgrade for the Blazer was for the light-alloy wheels, which were enhanced with new designs and sizes up to 21”.

Inside, Chevrolet’s infotainment system gained a standard 10” touchscreen placed atop the center stack. It complemented the TFT display installed inside the instrument cluster. Thus, the carmaker enriched the onboard features, enhancing the driving experience.

Under the hood, GM placed the same powertrains as before. The base version had a turbocharged 2.0-liter inline-four, while the range-topping model was the direct fuel injected 3.6-liter V6. 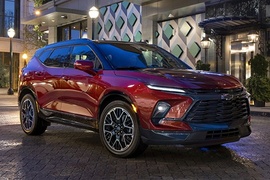