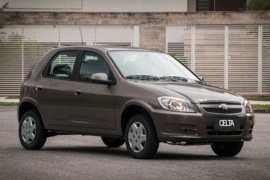 General Motors took an Opel/Vauxhall Corsa from Europe, slammed a new front fascia with inspiration from the Vectra lineup, and mounted a bow-tie badge at the front.
And that’s how the Chevrolet Celta was born.

The third generation of the Corsa was a European hit, and GM needed that success exported to other countries. The car made it to the South-American continent and was re-badged as a Chevrolet Celta with a new face and different engines, and the market warmly received it.

Dye to its Vectra-like headlights and grille, the little 5-door Celta looked more serious. The designers included a small and narrow, vertical side window in the C-pillar right behind the rear doors. That was a specific design element for the little GM vehicle in the small-segment. To protect the taillights from scratches and parking bumps, they were installed on the C-pillars.

Inside, the car featured good amenities for its segment, even though the base model didn’t feature power-windows or air-conditioning. The Celta was fitted with a sound system with a CD player, an on-board computer, and four power-windows moving up to the trim level and options list.

The Celta was available with three engine choices with gasoline or flex-fuel system. Its base version provided 60 hp, from a 1.0-liter displacement. For specific markets, GM installed a 1.4-liter engine to cope better with high altitudes. 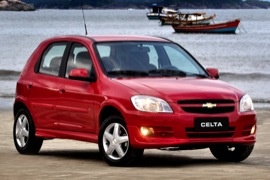 What’s the cheapest Chevrolet you can buy in Brazil? The answer is “Celta”.
The Celta 3, as they call the 3-door version, is in fact one of the cheapest new cars available. There’s good reason for this too, since there isn’t a single piece of modern tech on it. The Celta is available only with a 1-liter engine that produces 78 hp on ethanol and is mated to a five-speed manual. The body of the car is a stripped down version of the 1993 Opel Corsa hatch. The Chevrolet Celta has been rated as highly unsafe by Latin NCAP, scoring only one star for adult occupants and two stars for children.