The Chevrolet Cobalt may be dead in the States where it was successfully replaced by the Cruze sedan, but the nameplate lives on in the rest of the world.
After the debut of the concept version at the Buenos Aires motor show this past summer, General Motors today introduced the final production 2012 Cobalt that will eventually go on sale in 40 countries across Europe, Africa, the Middle East and South America - but not North America.

In addition to Brazil, which is the first country to receive the new Chevrolet Cobalt, the car will be produced in three more factories around the world, though GM did not disclose any more details on the locations. 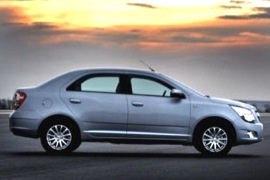